The North Eastern Region (NER) comprises of eight States viz. Arunachal Pradesh, Assam, Manipur, Meghalaya, Mizoram, Nagaland, Sikkim and Tripura. The development concerns of these States are pursued through their respective Five Year and Annual Plans as well as those of the Union Ministries and Central Agencies. In addition, projects of inter-State nature in the Region are funded by the North-Eastern Council (NEC), which has a separate additional budget for the purpose.

In the conference of Governors and Chief Ministers of the North Eastern States and Sikkim held in January 2000 at Shillong the Prime Minister stated the objectives of the Non-lapsable Central Pool of Resources. The relevant paragraph from Prime Minister's Speech is:

"My Government has also created a pool of non-lapsable funds for the North-East and Sikkim. This pool, meant for funding development projects in these States, will fill the resource gap in creation of new infrastructure, which is a top priority concern of the Union Government.…"

Funds from the Central Pool can be released for State sector as well as Central sector projects/schemes. However the funds available under the Central Pool are not meant to supplement the normal Plan programmes either of the State Governments or Union Ministries/ Departments/ Agencies.

During the year, the institutional arrangements for administering the Non-lapsable Central Pool has been streamlined. The guidelines to administer the Pool have been revised. The Committee to administer the Non-Lapsable Central Pool of Resources has been reconstituted. The reconstituted Committee is headed by Secretary, Ministry of Development of North Eastern Region and has representation from Ministries of Finance, Home Affairs and Planning Commission. Financial Advisor to the Ministry of Development of North Eastern Region has been included as a member. Representatives of Union Ministry/Departments, whose proposals are to be considered in a particular sitting for funding under NLCPR, are also invited.

For identification of projects under Non-Lapsable Central Pool of Resources, States are asked to submit, before the beginning of the financial year, a prioritized list of projects with a short write up on each project. The earlier practice of receiving projects throughout the year directly from the various state departments concerned has been stopped. Now the Planning and Development Department of the state concerned is the nodal department for NLCPR and that department is DoNER's interface with all other departments of the state. The priority accorded by the state to the projects in the 'priority list' is only a suggestive and the Committee scrutinizes the projects in the lists in order to identify and finally retain the suitable projects for detailed examination. In examining the priority, the committee is, inter-alia, guided by considerations such as:

Detailed Project Report(s) for such retained projects are then prepared by the state concerned. These project proposals are thereafter examined in consultation with the concerned Central Ministry/Department. The recommendations/views, thus received are place before the Committee to administer the Non-Lapsable Central Pool, which considers the proposal and accords approval.

After approval of the Committee, funds are sanctioned and released by the Ministry of Development of North Eastern Region on submission of an implementation schedule. Subsequent releases are made only after receipt of Utilisation Certificate of earlier releases.

As on May 2019, 18 (Eighteen) projects have been sanctioned for estimated amount of Rs. 291.61 crores under NLCPR. Out of this, Govt. of India released an amount of Rs.134.82 crores and State Govt has released Rs.9.50 crore, which are being implemented by ULB concerned. Out of 18 projects, 3 project has already been completed. Details are in Status Report 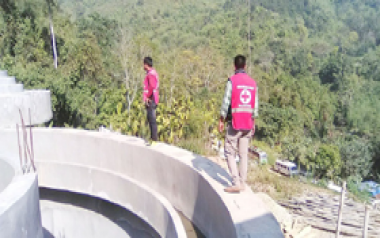